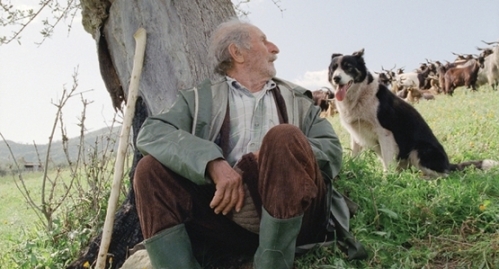 Le Quattro Volte. A highly unique film, exemplifying the visual medium of communication, documenting life moving from one form to another, in a town mostly untouched by the modern world, with large doses of humour thrown in!
For all intents and purposes, there is no dialogue throughout the entire film, forgiving a few inaudible murmurs between characters. This lack of dialogue is in no way missed, due to Michelangelo Frammartino’s direction and the stars of the film, the animals, and nature itself.
I’m not quite sure how much of it was staged, and how it was made to happen, but the goats and dog of this film are arguably far funnier than the highest paid comedians of Hollywood. The obvious sequence involving the shepherd’s dog, a rock, a truck and a procession. Couple that with the sorrow felt when the goat we follow from birth becomes separated from its pack, bleating away, trying to find its way back home, eventually settling into a hillside at night, starkly contrasted by the thick snow covering all, spelling inevitable doom; amazingly invokved emotions.
Having seen The Tree of Life so recently, there were similarities thematically with Le Quattro Volte, but where Malick’s scope was so, so grand, and framed around Christianity, I loved the smaller, focused scope of Le Quattro Volte. Inspired by philosopher Pythagoras’ belief in four-fold transmigration – from human to animal to vegetable to mineral, Frammartino steers the ship in such a way that the interconnectedness of it all is seamless and poetic, in tune with the four seasons, and the lives of everyone in the town.
In his review, A.O. Scott said…

You have never seen anything like this movie, even though what it shows you has been there all along

I haven’t seen many goats myself, but I don’t think I can put it any better.