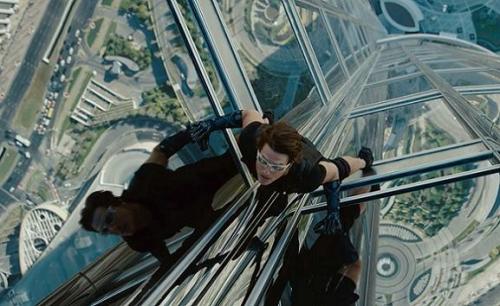 Tom Cruise is so meant for this role that it’s ridiculous. His physique, intensity and willingness to put his own body at risk are only magnified by the IMAX screen and Brad Bird’s wonderful direction. You’ve all seen the scene in the trailer with the craning shots atop the Burj Khalifa, but they don’t prepare you for half the beauty and thrill you’ll experience.

The technology used by the IMF agents in the field is constantly worth marvelling. There’s a scene early on in the film involving a holographic moving hallway that is absolute genius! I was laughing continuously for a good two minutes, in awe of what was happening, and didn’t for one second question the validity of it. Similarly, the augmented reality contacts or the throwing of a USB drive on a Surface-like interface with instant reading aren’t a huge stretch, but they’re used so well. Printing into that suitcase though, amazing! I can’t remember the last time spy technology has stood out in such a big way.

Jeremy Renner and Paula Patton turn in solid performances, and Simon Pegg consistently brings the humour. Even the fleeting glances of Josh Holloway indicated that he’s ready for a big action adventure role. The only sour point was a very WTF Anil Kapoor, playing some sort of sex-crazed, pathetic dialogue spewing Indian playboy. How or why he agreed to play the role he did, especially the manner in which he had to portray himself, I have no idea. It wasn’t worth the money or fame, dude.

I read just now that the running time is 2 hours and 13 minutes, and believe me, you don’t feel it for a second. Brad Bird’s foray into the live-action world of Hollywood is off to a spectacular start, and I can’t wait to see where he goes next. As for Ethan Hunt and the crew, I’m pretty sure they have a mission or two left in them, with this no doubt being the high point of the franchise to date.

Oh, and please, see it in IMAX!