‘The Avengers’. An absolute blast from start to finish! Whedon has pulled off the ultimate Summer blockbuster!

Superhero ensemble films are never easy to get right, and even the best of them to date, like X-Men: First Class, though thoroughly enjoyable, still fall flat in parts, with their throwaway, not-so-fleshed out characters. The sheer scope of The Avengers is insane. The Hulk, Iron Man, Captain America, Thor, Hawkeye, Black Widow, Nick Fury and Phil. Dear old Phil. What’s crazy is that this thing works SO well.

Massive props to Joss Whedon. His direction was fantastic, but that screenplay [along with Zak Penn], just genius. He’s no doubt had some help with the Marvel films of the last few years doing most of the character background and intros, but he uses what we know about each of these characters and mixes it all expertly into a giant pot of awesome. 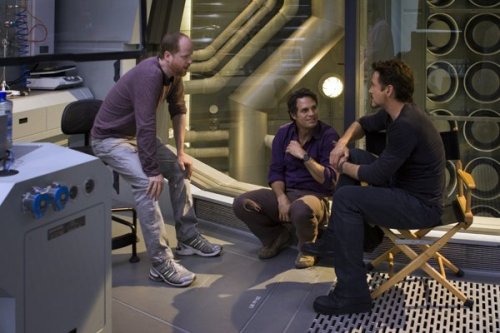 Time and time again, with Tony Stark mostly acting as catalyst, we’re treated to hilarious exchanges between the superheroes. The dynamics could have gone so wrong. Instead, Whedon nails it every time.

What’s better is that the characters we don’t know so well become fully realised. When I first saw the trailer, and that ridiculous shot of all the Avengers grouped together, Hawkeye with bow in hand, and Black Widow reloading a pistol, I thought, “Oh good lord, they feel so out of place”. They never do, even though they may be outclassed on the powers front. How Hawkeye and Black Widow are handled especially in the first half of the film works very well.

HULK. SMASH. Tony Stark may have the lines and that ridiculously amazing tech, but he ain’t nothing on that big ol’ lovable green bundle of joy!

The Hulk elevates The Avengers to a whole other level. Every moment he’s on screen is magic, and the really big moments of the film that had the audience cheering involved the big guy. Elegantly wreaking havoc while delivering abrupt humour is all in a day’s work for the mild-mannered Bruce Banner. Again, there were grumbles, and I had my doubts about Ruffalo; they were alleviated instantly, all while in Bruce Banner mode. This is easily the best version of the Hulk brought to the screen.

How much of my soul would I have to give for a Damon Lindelof and Joss Whedon co-scripted and directed Hulk film?

One little moment of geeksqueal was the Iron Man repulsor ray that Captain America deflects with his shield to take out a bunch of henchman. The sequel needs more awesome teamwork sequences like this!