LOST began with the black credits fading into Jack Shephard’s right eye opening, while he lay there in the bamboo field, and it ended with Jack Shephard’s right eye closing, lying in that same bamboo field, fading into those same black credits. Why not just call the show ‘Full Circle’ or ‘Mirrors’? I’ve watched the last 30 seconds several times now, and the finale twice, and the whole series twice, and I’m satisfied with the end.

I’ve slowly come to a realisation over the years that The Island and the mythology that came along with it was just a backdrop for a show about people, and that more than came through in the finale. Sure I want answers, and I feel I’ve got more than enough of them, but for the diehards that watched LOST until the very end hoping that every answer would be presented in a box, nicely tied with a ribbon, I’m sorry, you probably didn’t get what you wanted out of the finale.

Or “Collaborative Purgatory”? Those damn opening credits spoiled it for me and @marawlings, but when I saw John Terry’s name come up, I cheered, and it was a well warranted cheer.

There is no ‘now’, ‘here’. This is a place that you all made together so you could find one another. The most important part of your life was the time that you spent with these people. That’s why all of you are here. Nobody does it alone, Jack. You needed all of them, and they needed you… To remember, and to let go… [you’re] not leaving, no, [you’re] moving on

The Flash Sideways may have seemed to start, September 22, 2004, but I guess only fools are enslaved by time and space, and we’re fools for thinking that way. I have no idea when the Flash Sideways are occuring, and I’m guessing no one does. Why start with Oceanic 815? Because that’s where these characters first met, where their journey first began.

Let’s be clear though, The Island is not Purgatory. They lived and died on The Island for six seasons, and I believe that the Flash Sideways only started occuring after everyone died in that timeline.

Somehow, I didn’t think we’d see as much of “The Heart” of The Island as we did, so, again, I was happy with that! Desmond releases the light, all rules become negated, MiB sees blood coming from his mouth for the first time in a long time, and after a relatively epic battle, he dies, being kicked off the cliff by Jack, with of course, the bleedingly obvious parallel/shout-out to how MiB kicked Jacob into the flames at the end of season 5.

Releasing that light didn’t do much for The Island of course, and Jack ends his short stay as The Island’s guardian, passing over the mantle to Hugo, and sacrificing himself in the process. Hugo asking Ben for help, as opposed to Jacob’s douchebaggery/neglect, showed the way things should have been run on The Island, and when Ben’s happy, I’m happy! I don’t have as much love for Hugo as a lot of people seem to, and even before this episode started, I was wondering what his purpose would be, but in the end, I can’t argue with him taking over Jacob.

Vincent is Matthew Fox’s dog [a girl, at that] in real life, apparently. That scene, with Vincent slouching next to Jack, with the plane flying over, was magical. 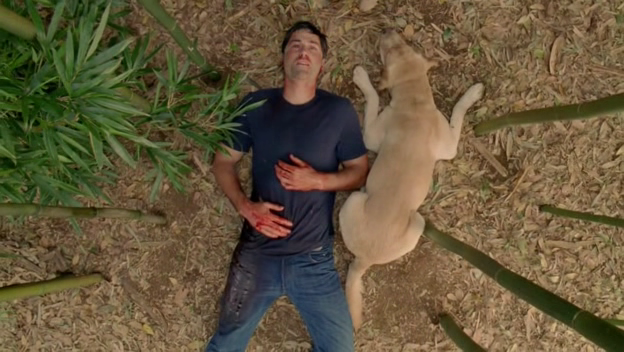 Does it feel like an ending to me? Look at the questions [non-rhetorical] I’ve raised in this post, as opposed to the other 17 posts this season. Can’t see many? There’s your answer. To me, this was The End, and I’m sad as hell about it, but I’m satisfied. There is nothing that I’m still thinking about, that’s still itching away at me. Call it denial if you want, and maybe you’ll see anger next, but right now, I’m happy.

Looking back at the post in general, it may look like it’s been structured in a completely random way, but this is literally how my thought process went, after I sat down at home to watch this for a second time. Adding this paragraph at a random place in the post adds to its randomness. I’ll stop saying “random” now…

To Hugo [of the French developer variety] and Vantah, thank you for your hospitality!

To @marawlings, @amandamli, @gkshortee and @renny510, really, really glad to have watched this finale, and shared so many other LOST moments with you guys ^_^ Definitely a night I won’t forget.

Coincidentally, I think the @amandamli Cry Counter got to 8.

To Ariel and @jamiepride, the latecomers, by circumstance more than anything else, great to see you both there!

To everyone that’s read/commented on the blog, thank you! The conversations have been great, and it’s been a blast producing this verbal diarrhea.