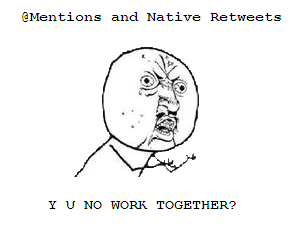 Time for a rant.

I don’t know if it was #NewTwitter, or if it was before that, but this fucking disparity between @Mentions [old school “RT”] and Native Retweets is annoying as hell.

Here’s the crux of it:

I will see the old school RT come up in @Mentions on the web interface, or, in Tweetdeck—my preferred Twitter consumption application—under Me / Mentions. I will have NO visibility over the 10 Native Retweets, as they will only show up in the ‘Your Tweets, retweeted’ column of Person X, or, on occasion, in Person X’s Mentions / Me column.

Do most people care? Probably not. But, as I’ve said many a time, I’m a narcissist [maybe I should add that to my Twitter bio [how meta]], so yes, I’d at least like to see it show up SOMEWHERE.

It’s simple enough. If you have TweetDeck [I assume you can do something similar on most of these apps e.g. HootSuite, Seesmic], remove your Mentions column, and just add a column with your Twitter handle e.g. ‘@c0up’.

What does this do? It should show you old school RTs, Native Retweets, and account for the case above, showing old school RTs that have been natively retweeted.

Why does this work? Because Twitter’s search function turns Native Retweets into old school style RTs… It feels like they didn’t quite think this through.

I know that TweetDeck tries be as faithful as possible to the Twitter API, but I wish they’d just bundle Native Retweets and old school ones together.

*sigh* it’s just never that easy, is it? Turns out this doesn’t in fact solve everything, because with a “search” column being added, any mentions from users who have protected their tweets don’t show up /FACEPALM

I wrote this post just last week, and now, for whatever reason, native retweets don’t show up in search results anymore, so we’re basically back to square one…