You know what? I’m glad this whole phones keeping track of everywhere you go thing happened, because, pushing all those pesky, minor concerns about privacy away, it’s really kind of cool!

Hot on the heels of the iPhone tool that showed us the smorgasbord of data that’s being stored, someone decided to see what Google / Android does. It turns out they store location information as well, just, no way near as much as Apple

After a period of time, 12 hours for cellular data and 48 hours for WiFi data, has passed, the location data is renewed by a new request from Google. It is also limited to a maximum number of entries so that the database doesn’t grow too large.

Swindon says that the location file pulled from his phone contained roughly 13,000 entries related to cellular network tracking. By contrast the Android file is limited to only 50 entries in the cellular location database.

via The Next Web

Maybe it is just a bug, or lazy programming or whatever on Apple’s part, but it makes sense, especially in Google’s case, where they delete / refresh the data, and you can see it being useful for location-based services.

This same someone that decided to see what Google do, created a Python script that you can feed the Wi-Fi and Cell cache files into, and then output into a .gpx format, to eventually visualise on Google Maps, so I just went ahead and tried it out, purely with my Cell cache file. 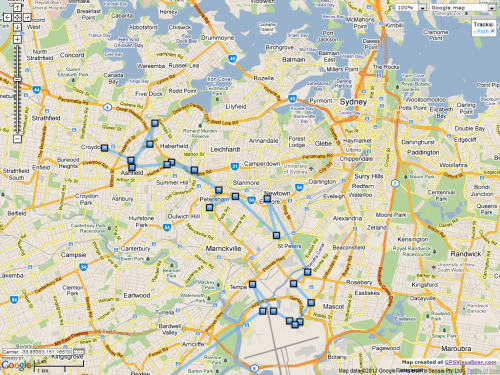 So yeh, I walked around Melbourne for a while during the day, eventually went to the airport, flew to Sydney [I’ve omitted that because obviously there was no data between Melbourne and Sydney while flying], and then went home. As it’s just the Cell cache, there are a few erroneous data points, but overall, that is pretty darn accurate, awesome, and creepy!

If you’re feeling adventurous or curious, and a little geeky, here’s how you can do it…

Note: You need root access to your Android phone to get to the file

That should get you a map. I’ve possibly taken a very cumbersome approach to all of this, and there might be some shortcuts, but I just googled a few things and, well, it worked.

Now, you can get your own Google Maps API key and then embed the map onto your website, and customise the crap out of it, but I can’t be bothered, so I just took a couple of screen captures.

I thought it was pretty cool, and who knows how it can be used, especially with the iPhone’s “feature”, keeping weeks / months of data at a time.

And a day or so later, there’s a one-click app that does the same thing!

2 thoughts on “Where I went yesterday, via my Android phone”