Commonwealth Bank are piloting their NetBank Vault app on Android. I got to try it this weekend.

It’s a secure online storage service where you can upload, organise and manage all of your files and documents. Think of it like a personal virtual safe deposit box; store receipts, payslips, photos, you get the idea.

I’ve become a heavy Dropbox user lately, and I’m using Google Drive too, for the extra storage space. They’re both pretty similar in their functionality, and both their Android apps are slick.

tl;dr Vault has a long way to go.

The labels above the fields really aren’t needed, and unnecessarily clutter the screen. Tumblr and Pocket are two examples of apps I’ve seen recently that do it cleanly. 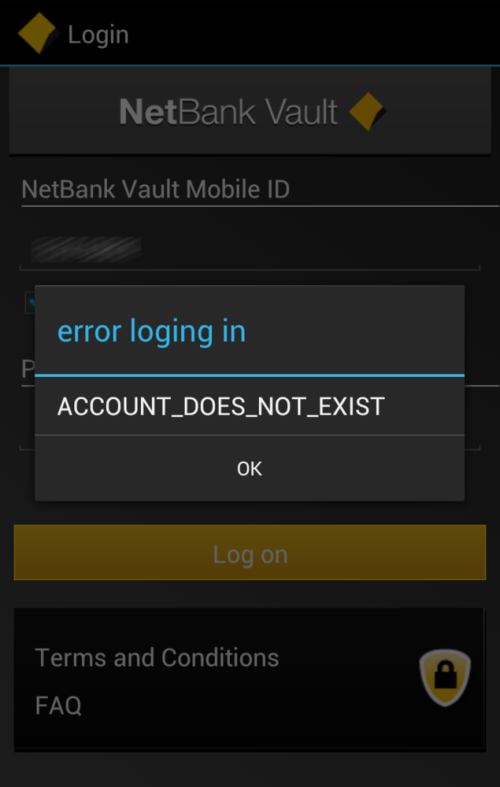 The error message is not the most helpful, and there’s a spelling mistake. The funniest thing is, reason it was happening was that the “User ID” was actually meant to be my mobile phone number; why not just say that?

What’s up with the weird icons in the action bar? The iconography section on Android Design should tell you all you need to know. Those two icons could be combined, with a dialog box asking whether the user wants to take a photo or upload one from their gallery.

I’ve left the virtual buttons in at the bottom to show that the Menu overflow makes its way into the mix, when it shouldn’t be there.

Sort. Maybe use a spinner with some clearer labels; the icons really aren’t needed.

The dialog box to preview your upload and label it looks terrible. Would users really mind if you went to another screen to do it?

No bulk upload. No PC/Mac clients.

The app crashed every time I tried to preview or open any files I’d uploaded.

Yay to the use of the spinner against each filename! The overlay that Rename, Comments and Delete are housed in look a little off. Dropbox and Drive do it a lot cleaner.

The search bar is enabled by tapping the Search label, which is all kinds of strange. Throw it up in the action bar? 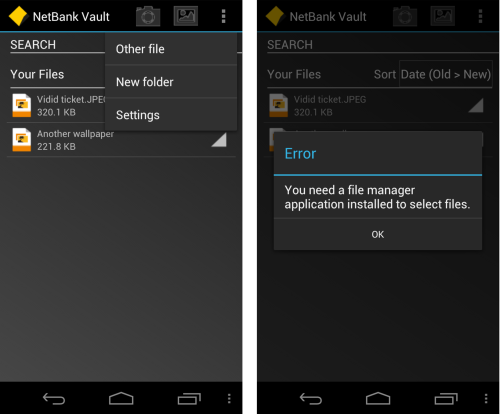 What is “Other file”, and why do I need a file manager?

You might as well remove the tutorial if it’s buried away in Settings and looks like that!

If I’ve been harsh, it’s out of love, and wanting to see Android apps done well. Here are several I think do alright.

I know it’s early in the pilot, and I really hope to see some improvements, because now I’m quite sad about the prospects of how Kaching for Android will look.