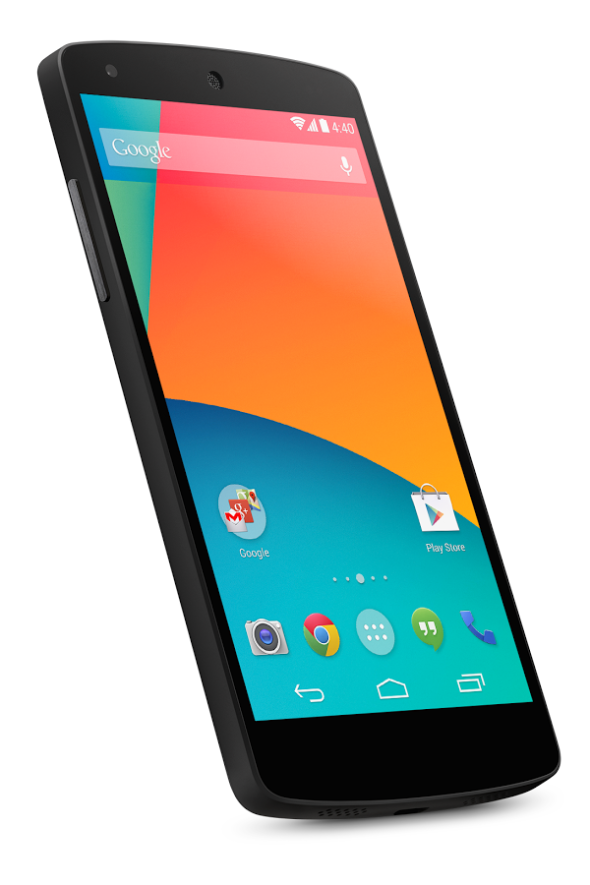 PSA: I switched from a Nexus 4. That’s the context any comparisons I implicitly make will be in relation to.

The Nexus 5 feels better to hold and touch, it’s lighter, the screen is a vivid, beautiful piece of glass to look at, everything is faster, transitions and scrolling smoother, the camera’s better (especially in low-light), the LTE is welcome, the battery gives me a day.

I’m sure the tech blogs will post their comparison shots from five different phones in a multitude of conditions to put the camera through its paces. As a casual Instagrammer, I’m very happy with it so far. Also, I’ve been running builds that aren’t final, and the capture/processing software is improving all the time. Here are four from the past month, au naturel.

In a badly-lit bar, sans flash

For comparison, the N4-equivalent of this photo was a solid black rectangle.

The other big change is Google Now getting more attention, making its way onto the home screen. It makes sense. The gesture required to get to it previously had it sitting (spatially) in a strange place. Now it’s replaced a whole bunch of widgets I used to have on a home screen. The topic cards it’s bringing up about movies I’ve searched for/seen are nifty, and I’m getting TV episode recap cards the night a relevant show airs,  from The A.V. Club, a site I normally frequent for recaps on my MacBook Air. This wizard-like synchronicity and pre-empting across any device I own is something I could get used to. Continuously throwing money at Amazon Prime has made the parcel tracking cards useful too!

UI-wise, there are a huge number of tweaks. Some you’ll notice, some you won’t. They all contribute to a general sense of cleanliness, subtlety, and allow 3rd party apps to impart their brand in easier ways. I’m a huge fan of the translucent status and navigation bars. The home screens feel very immersive as a result, and I can’t wait to see other apps embrace this.

More broadly speaking, the price may well be the killer feature. I’m not paying for mine, but to see a high-end phone that’s nearly half the price of its competition is crazy. The Play Store seems to have held up to the online demand, and I loved reading the various threads on /r/Android when it launched. On the flip-side, 4.4 being a viable option to the millions of low-end 512MB RAM phones that are being manufactured every day should help reduce the dreaded F word.

There’s a LOT that’s been announced with 4.4 that I’m forgetting, or have taken for granted after this long. I’ll leave that to Android Police and Ron Amadeo.

I deliberately avoided going into specifics about the battery and posting screenshots of uptime, because I haven’t been running the version that you guys will receive this whole time. Every tech blog will go into it anyway.

And yes, I should have taken comparison photos. I didn’t think at the time that I’d write this. I did it for kicks last night, picking some photos from my gallery that represented a few conditions.